Do you have a question?

You can send us an email whenever you like.
We will try to respond as soon as possible.

Do you have a question?

E-Mail: info@hhp-uk.co.uk
Or use our

Want to stay up-to-date?
Then subscribe to our newsletter.

Andullation has a long history of development. Mechanical vibration has been used since 1880 to help people with their ailments.

The effects of vibrations on health have been studied for years. In 1880, a vibrating chair was used for the treatment of Parkinson’s patients, and in 1949 a vibrating bed was built, which increased the regeneration after immobility and exerted a positive influence on the respiratory function and circulation.

The “biomechanical stimulation” was then introduced as a therapy form, by which a training effect of the muscles could be reached about ten to a hundred times faster. An increasing number of studies have been conducted that have shown an improvement in knee stability, indications for improvement in postural control in stroke patients, and the improvement in stability in patients with Parkinson’s disease.

Research was carried out even more intensively and the oscillation process developed. The disordered frequencies of the mechanical vibration were converted into an ordered frequency pattern. The first oscillating devices came onto the market. By the application of the oscillation the improvement of physical functions could be observed. This was eventually used in space research to counteract muscle and bone loss due to weightlessness.

After the company was founded in 2001, the company hhp began to pursue the ongoing development of the oscillation technology for the therapeutic application of physical frequencies. In the following years it developed into an important sponsor of science and research in this area. The long-standing scientific findings from the basic research, the further developments of the existing oscillating system and its complete overhaul in the therapeutic transmission of physical frequencies, led to the development of the andullation, which was patented in 2007. 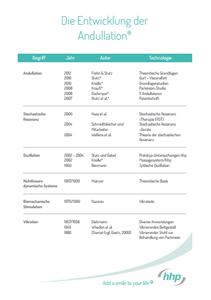 Visit us at a location near you and experience our products.

Find it difficult to travel to see us? Not a problem, request your application for home.

Learn more about andullation on our "healthy back" days.